If you dig putting on the fancy duds, the steampunk goggles, the stormtrooper armor, the fluffy dog ears, the superhero cape, the wizard robes, the Dr. Who scarf, the life-size Godzilla feet, or any other sort of costume, garb, get-up, or disguise then Con on the Cob is the place for you. One of several places, actually (Here’s another).

Costumes are encouraged at Con on the Cob. All costumes (as long as they’re legal and safe for the chillunz to see). Imagination is Earth’s most important resource and we want to see what’s cooking in your noggin. Show us what you’re into. Be PROUD. Sing it LOUD. Don your duds and strut your stuff.

Cosplay has always been an important part of Con on the Cob. We love the characters. We love the creativity. We love the ingenuity, the craftsmanship, the energy, and the performances. We also love other things about it but that's what comes to mind as I type this.

In an effort to step up our Cosplay game we are extremely jazzed to announce some great changes and additions to the annual Costume Contest and the Cosplay Programming Track in general.

Let's take a look, shall we?

Your hosts for Con on the Cob's 2022 Cosplay Extravaganza are Chelsey and Shannon. Cosplay HQ is located in the coat room directly adjacent to The Artitorium. This is the place to go to signup for the CotC Costume Contest (see below). It is open and staffed the following hours:

Stop by Cosplay HQ if you require any cosplay assistance or advice or if your costume is in need of repairs. Our Cosplay Hospital is stocked with a number of emergency items to prevent wardrobe malfunctions and other foreboding happenstances.

Who is there among us who will reign supreme as the IRON COSTUMER? Who has the chops to make a super cool costume using only the art supplies and ingredients provided by The CotC Artitorium? Is it you? Maybe... 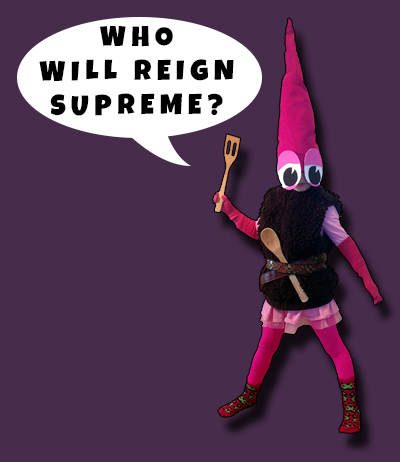 It's a parade of people wearing costumes. The action starts at 5:00pm on Saturday, when we all meet in the hotel lobby, and then we meander our way through the entire convention begging for treats and showing off our duds. It's for kids and adults and it leads into the costume contest.

Cosplay has always been an important part of Con on the Cob. We love the characters. We love the creativity. We love the ingenuity, the craftsmanship, the energy, and the performances. We also love other things about it but that's what comes to mind as I type this.

In an effort to step up our Cosplay game we are extremely jazzed to announce some great changes and additions to the annual Costume Contest and the Cosplay Programming Track in general.

The CotC Costume Contest is a prejudged event. This is an opportunity for contestants to let the judges know all about their costume, the work put into it, the inspiration behind it, or anything else special about it.

Contestants have two options when it comes to registering for Costume Contest Pre-Judging:

In order to ensure a safe, fair, and exciting contest the following rules and policies are in place:

The cosplay showcase is Saturday starting at 6pm on the main stage. Strut your stuff, show off your costume, prance around like a dork, do a little dance, whatever... You’ll have a chance to tell the audience about your cosplay and may be asked a few questions by the Host.

Awards will be awarded at the end of the Costume Contest. The Corny Award for Best In Show will be presented at the Closing Ceremony.

Contestants are categorized according to their level of skill and experience. Each contestant chooses which skill category to enter, according to the standards described below, although judges reserve the right to adjust a contestants skill level if they feel the contestant is attempting to enter at a level below their actual skill.

All children of the Cob (ages 10 and under) are encouraged to participate in the costume contest, although they are exempt from prejudging and all kids who walk the stage will earn a prize.

If at least one of the following criteria are met you may enter in this category:

You must enter in this category or higher if any of these items are be true:

If any of the following are accurate you must enter in this category:

Shannon has been cosplaying for over a decade, the last several of which she has been crafting and competing. She always knew she was different growing up because she loved dress up more than anything. Over the years her playing dress up has blossomed into her successful cosplay career which is still on the rise. She started when she was only twelve years old, and has made upwards of over thirty custom costumes in the time between then and now. She primarily specializes in armor and props, making things such as full plate armor or life sized swords axes and bows. In her downtime from crafting and competing, she likes to play video games preferring RPGs and FPS. She also participates in some character dungeon delving with her dungeons and dragons group that she plays with every week.

Going by the name Sheikahchica Cosplay, Lindsay has been cosplaying since 2009, with 65+ costumes (including variations) under her belt. She has been featured on numerous websites, such as Kotaku and Geeks Are Sexy. She has also appeared in the Women VS Cosplay 2017 calendar and the Star Wars 40 Years of the Force special edition magazine by Time Magazine. She is an artist, writer, and gamer, previously writing for the former Examiner.com as their Cleveland Girl Gamer Examiner. She currently works with the Tangent Bound Network as a con correspondent. Also an actress, she has appeared in Marvel’s The Avengers, and is the female lead in the upcoming movie Forever Knight by Curseborne Films. One of Lindsay’s greatest passions is giving back through costuming, raising funds for charity, and volunteering through the 501st Legion, the Rebel Legion, Heroes Alliance, and the Columbus and Cleveland Ghostbusters. Lindsay believes that CAUSEplay is about the impact you leave behind – encouraging others to follow their dreams, being a hero to those who need one, and leaving smiles in your wake.

Zac Taylor of Electro Z Cosplay was born in Wheeling, West Virginia and resides in Ohio. He has always been interested in acting and martial arts. He officially began training in Taekwon-Do when he turned ten years old. He has been lucky enough to have trained under and with many renowned Masters and Grandmasters. In Taekwon-Do he is a sixth degree black belt, international instructor, national and international champion, world competitor, and class A umpire. He has been a member of team USA multiple times and an official at world championships. He has helped spread Taekwon-Do in his local area through many demonstrations. In 2016 he opened his own Taekwon-Do school (Taylor Taekwon-Do Academy). He has attracted many black belts to his school and loves training and developing students as well as helping them achieve their goals. Also, he is a founding member of ITF HQ-USA where he is the Ohio State Representative.

Zac very much enjoys entertaining people. Through cosplay, he loves to bring his favorite characters to life and smiles to people’s faces. Although he has been dressing as his favorite characters for as long as he can remember, he began trooping with the 501st Legion in 2011. He is also involved with other groups like the Heroes Alliance that gives him the opportunity to do many charity events. Besides charity events he has also worked with some of these groups to help entertain at conventions. He feels it is very rewarding to have helped make someone else’s day, even if just for a short time. His most notable cosplays include The Flash, Emperor Palpatine, Anakin Skywalker, and the Red Mighty Morphin Power Ranger, among others.

Outside of cosplay and martial arts, he has had the opportunity to combine his skills to get into acting and stunt work. Recently, he has become a stunt team member of Steel Legion Stunts. He has been involved with various projects including fan films and 48 hour film competitions. The projects he has been involved with such as The Three Chocolatiers: The Cotton Tail Of Revenge, and Unclean Hands have even won awards for best fight choreography. He will also be featured in the film The Order.

Steampunk enthusiast, Ghostbusters addict, furry, and an all-around well rounded cosplayer. I got my beginning as a costume and prop maker from watching my mom, a seamstress by trade, make quilts and my costumes for Halloween since about the age of 5. At around 12 years old I asked her to show me how to use a sewing machine. It was the spark that has led me down a path of creativity that I am very grateful for. Since then, I have ventured into different materials and techniques for other various things and props for my cosplay. EVA foam is a gift from the crafting gods! My first big endeavor was a wizard staff about 16 years ago which has led me to many great things and pushing myself to try and outdo my previous project. If it brings a smile to someone, I know I have done a great job.