Publishers bring the fantastic games we play into creation! We want to thank those publishers who support local conventions like ours with door prizes for our participants. We are grateful for your generosity!

GREEN RONIN PUBLISHING: creates roleplaying games, card games, and fiction. Our award-winning product lines include Mutants & Masterminds, Dragon Age, A Song of Ice and Fire, Blue Rose, and many more. The Expanse and Modern Age are two of their games that RPGA-con demos.

MODIPHIUS ENTERTAINMENT: Modiphius Entertainment is bringing you a wide range of worlds to explore, including our own terrifying vision of World War Two - Achtung! Cthulhu, a roleplaying setting for Call of Cthulhu and Savage Worlds. We have re-booted the fantastic sci-fi dieselpunk world of Mutant Chronicles with the 3rd Edition of the roleplaying game and the new edition of the Siege of the Citadel board game. We launched the official RPG for Corvus Belli's Infinity universe, the Thunderbirds co-op board game by Matt Leacock, Airfix Battles, a new introductory wargame, Robert E. Howards CONAN - Adventures In An Age Undreamed Of! and Star Trek Adventures, the 4th edition of this fantastic roleplaying universe. Fallout: Wasteland Warfare is launching soon, a miniatures game set in Bethesda's fantastic video game universe and the official Kung Fu Panda boardgame, the newly announced official DUNE roleplaying game and The Elder Scrolls: Call to Arms miniatures game. 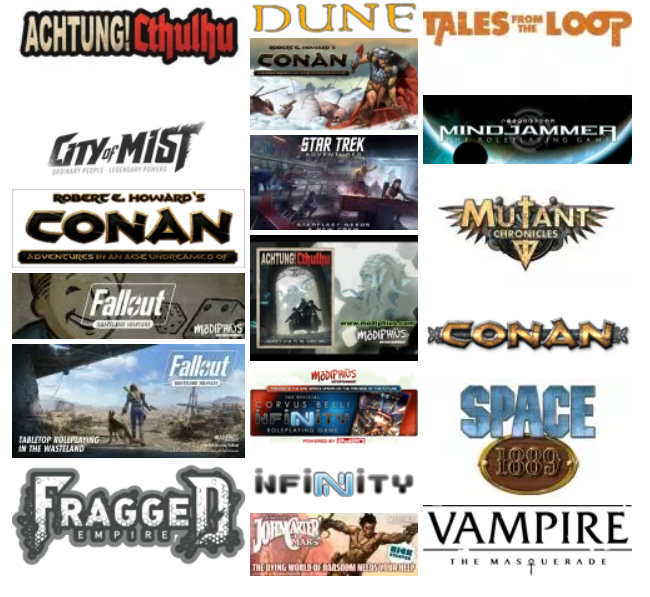 Mongoose Publishing is a British design studio of role-playing and miniatures games, actively publishing material since 2001. Its games include Traveller, Paranoia, Legend, and Victory at Sea. Our Con is running two Paranoia games , one in each program.  For more info check out Game Master Nickayla's Video Profile on our youtube channel!